Nick and I finally got around to dealing with the post-Christmas chaos this weekend. We took down the tree, found forever homes for all of our gifts, and cleaned up Wrapocalypse 2011 (my nickname for what became of the guest room by the time every gift was tied up with care). Unfortunately, it wasnŌĆÖt all rainbows and Christmas Miracles. 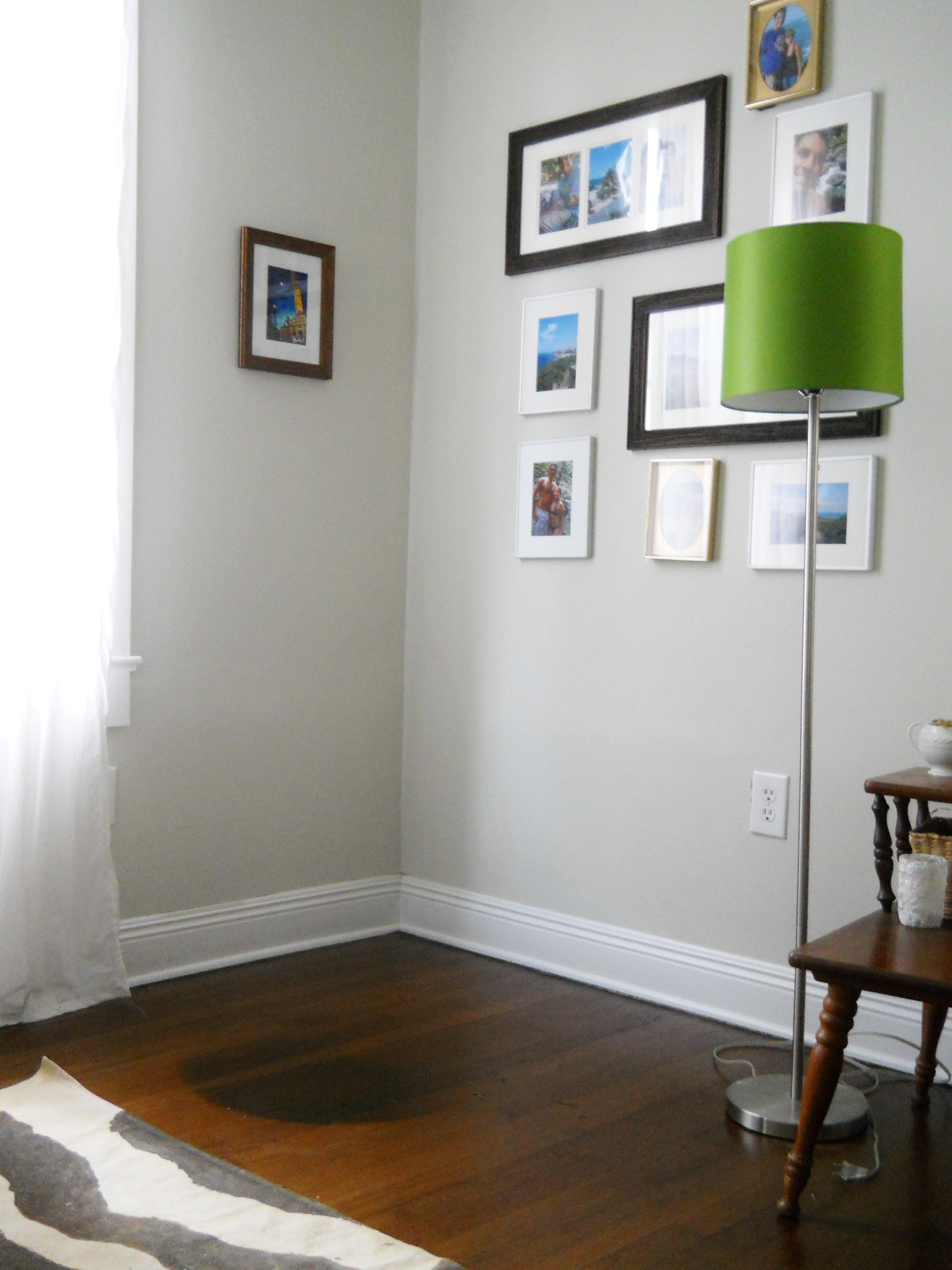 See that dark stain on the floor where the Christmas tree used to be? 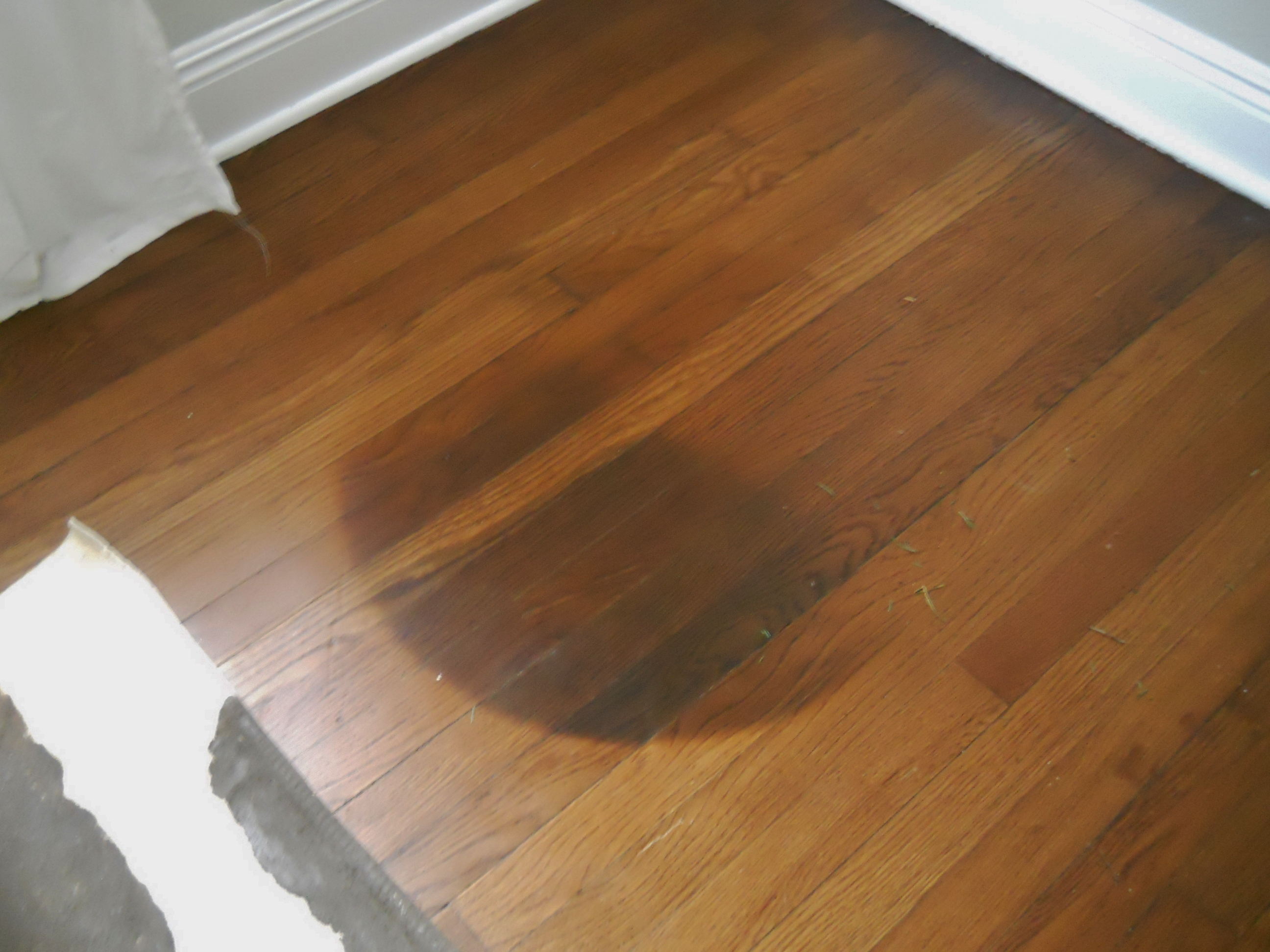 Even though we had put a towel down under the tree stand, apparently enough water escaped during our clumsy watering attempts to soak through and damage the floor. This was one of those moments where your heart sinks down to your feet and you wonder why anyone ever allowed you to be a homeowner.

We havenŌĆÖt even done anything about it yet, except try to avoid looking at it. IŌĆÖve done a bit of googling in ┬Ābetween bouts of self-pity and have some ideas, though. My goal is to avoid having to sand and re-finish that area, which is what most of the internet seems to preach as the best overall solution. One website said to place a towel over it and apply a dry iron, but I think that method is best put to use on less severe damage (water spots that appear white in color, such as from a drink set down without a coaster). The other option IŌĆÖm considering is to apply a towel soaked in vinegar. Seems easy enough and carries little risk of making things worse. Many websites suggested the use of bleach or oxalic acid, but IŌĆÖm really worried about causing more harm than good. Those will be last ditch efforts for me, if necessary. Part of me wants to just throw a little rug over the spot and pretend that it never happened. I know thatŌĆÖs not the mature and homeowner-y thing to do, though, so IŌĆÖll be putting on my big girl panties and dealing with it for better or worse. Any ideas or suggestions? Tell me weŌĆÖre not the only ones this has ever happened to.

In less gut-wrenching news, my beloved alma mater is playing in the college football national championship game tonight! I am so freaking stoked, and Nick is just beside himself. He jumped out of bed this morning to put on his favorite LSU shirt and then reminded me to be sure to wear purple and gold to work today. I kind of feel like major milestones in my life are a good omen for LSU. I showed up my freshman year-LSU won a national championship for the first time since 1958. I finished undergrad and started grad school at LSU-they won another national title that year. And now I get knocked up and what do they do? Go and have a perfect season. Coincidence? I think not. IŌĆÖm mostly kidding, of course. I know that the credit goes to the coaches and players, but no one can deny that college football is a big part of life here in Baton Rouge. Some of the swankier private schools are closed today because so many of their students will be attending the game. And I donŌĆÖt even want to think about what NickŌĆÖs mood will be like for the next several days if things donŌĆÖt go as we hope tonight. He actually lost sleep the other night because a highly recruited local high-school senior announced that he would be attending Alabama instead of LSU. We feel pretty confident about tonightŌĆÖs game, though, especially since weŌĆÖve already beaten Alabama once this year. Anyway, IŌĆÖm rambling. I hope you all had a restful weekend, that your Monday is cheerful, and that your floors are in pristine condition. Geaux Tigers!

11 responses to A Christmas Cleanup Crisis