Where to Buy Inexpensive Glasses

I got my first pair of glasses when I was five-and not just any pair of glasses. I‚Äôm talking giant frames and coke-bottle lenses on my tiny, tiny face. I was petite even then. 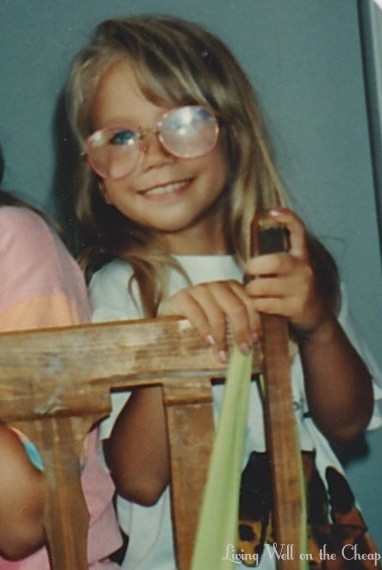 I must actually be closer to six or seven in this picture because the pixie haircut I gave myself just before starting kindergarten had grown out.

I held my glasses solely responsible for my lack of popularity throughout elementary and middle school (nevermind my awkward nature!) and started refusing to wear them somewhere around sixth grade despite the fact that I needed them desperately. At 14 I finally got contacts. In the years since I‚Äôve done my best to forget that I even have impaired vision, leaving my contacts in for weeks at a time and replacing them so rarely that I could stretch a year‚Äôs supply into two. I know, I know, this is irresponsible. Many an optometrist has scolded me for this practice. A few months ago I knew I was well overdue for an eye exam and scheduled an appointment at Target Optical. I now have vision insurance for the first time in years so I figured I could finally get some new glasses to give my eyes a break from contacts in the evening. Imagine my surprise when, even at Target, even with insurance, my lenses and frames were going to be over $150! I was ordering a year‚Äôs worth of contacts at the same time so I just couldn‚Äôt stomach the cost. When I picked Jack up from my friend Gina (who‚Äôd kept him while I did the stressful which one is better? routine with the optometrist) I told her about it and she mentioned that she‚Äôd bought her glasses from a discount web retailer. Say whaaaat?¬ÝTurns out that there are several inexpensive glasses retailers out there. I‚Äôm not sure I‚Äôd recommend them if you‚Äôre bespectacled full-time and would be annoyed by lack of quality, but if, like me, you just need a spare pair to peer through in the evenings then this may be a smart cost-saving measure. Here are a few I found in my search:

Coastal.com-this is where Gina bought hers. She says to sign up for their email list and wait for a promo code. She was really happy with them!

Eyebuydirect.com-this is where I ordered ours. Despite some bleak reviews online they arrived in good condition in about three weeks.

Zennioptical.com-online reviews of this company are actually pretty great!

39dollarglasses.com-the only downside here is that $39 is as low as they go

I went ahead and ordered new glasses for Nick, too. I just called his eye doctor and asked them to give me his prescription. He hadn‚Äôt been there in over a year so I‚Äôm surprised that they didn‚Äôt insist he come in for a new exam, but I think he‚Äôs planning on heading to Target for his next one anyway-it‚Äôs pretty convenient to get your eyes examined someplace you already frequent. I asked him if he cared what kind of frames I picked out for him and he said no, but later that evening when I showed him the full-rimmed pair I‚Äôd chosen he thought I was joking. It‚Äôs a good thing he‚Äôs not very vain because they‚Äôre definitely not what he would have chosen for himself, but I like them! I‚Äôd tried on a pair of pink girls‚Äô frames before sticker shock set in at Target and thought to myself that maybe I wouldn‚Äôt hate wearing my glasses so much if they were fun. So when I finally got around to ordering our glasses online I went for pink. What do you think? I love them!

We didn‚Äôt use our insurance for these (I‚Äôm not sure EyeBuyDirect even bills insurance, and I am not up for the task of submitting a claim myself) but even paying completely out of pocket we only spent about $80 total! It would have been half that if it weren‚Äôt for my nuclear-strength prescription, but perfect vision for the practically blind comes at a premium. If I can get myself in the habit of switching my contacts for eyeglasses every evening before bed maybe I can call myself one step closer to being an actual adult. Next task-getting myself to the dentist twice a year! I was doing well for a while there but I haven‚Äôt been since Jack was born. Speaking of the little guy, my heart is breaking at the realization that he‚Äôs probably doomed to wear glasses as well. Nick and I both HATED it and I‚Äôd rather not subject him to the same thing. Maybe by the time he‚Äôs old enough to need them they‚Äôll have invented some miracle cure. Fingers crossed!

10 responses to Where to Buy Inexpensive Glasses