I was so proud of myself for building that shelf (see how I did it here, if you missed yesterday’s post). Next up was getting it on the wall. I was so excited to replace the dinky little peg rail we’ve had in our entryway since we moved in over a year ago.

First I painted everything except the front and the back. Top, bottom, and sides each got two coats of Valspar’s off-the-shelf white semi-gloss. The front of the shelf got no paint for now, but it did get three big ol’ pilot holes drilled, plus a series of smaller pilot holes for the hooks (more on those later). Then, I used a studfinder to locate a horizontal stud and had the stud who lives with me hold the shelf up against the wall with a level balanced on top.

Since I’d countersunk my screws on the back, the shelf sat nice and flush against the wall. It’s so nerdy but I’m so proud of that little DIY detail. I am not at all detail-oriented so the fact that I took the time to do that delights me to no end.

Here’s how we hung it on the wall: Once Nick had everything level, centered, and lined up with the stud (which we just marked with two lines near the edges of the shelf), I stepped in and drilled each pilot hole a little bit deeper, making sure my drill bit got into the wall behind the shelf. Then, I used a pencil to draw a line on the wall across the bottom of the shelf (so we could get it back exactly how it was), took the shelf down, and drilled the holes even deeper. My drill bit only went like 1.5″ deep, so getting the shelf out of the way helped me drill further into the stud. With all three pilot holes sufficiently deep, Nick held the shelf back on the wall, carefully lined up the bottom edge with the line I’d drawn, and then held it steady while I used some 2″ screws to fasten it to the wall.

We are in no way DIY experts, so there are probably way more efficient slash effective ways to hang a shelf, but since we have absolutely no idea what we’re doing we just sort of stumble along and hope for the best. Right or wrong, we were mega proud to discover that things actually seemed pretty sturdy.

I covered up those screws with some more spackle, once again insanely impressed with my countersinking skills.

Do you see all those vertical pencil lines drawn on the board? That’s how I marked for my hooks. I outsourced the math to Nicholas, who told me to space my 10 hooks 4.5″ apart. I ran a horizontal line down the board (not exactly centered, because I didn’t think that mattered much), then marked a vertical line every 4.5 inches (one for each of my ten hooks). The holes in my hooks (bought on sale at Hobby Lobby for $2 each) were 3/4 of an inch apart, so I made a little dot to mark the spot for my pilot hole 3/8″ to the right and left of each of my vertical lines.

I slapped two coats of paint on that baby and started getting excited. I used a toothpick to clear the paint from my twenty little pilot holes after each coat.

My hooks didn’t come with hardware, so while the paint dried I brought one of them to my local hardware store and asked someone to help me find 1″ long black screws to fit it. $2 and a few turns of the screwdriver later we were in business.

I spent about 30 seconds fretting about the hooks being perfectly straight before deciding to just ignore it and start decorating. 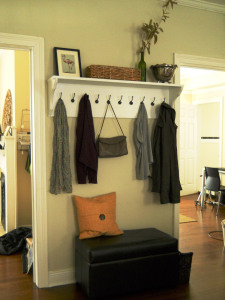 OMG. It’s everything I hoped and dreamed it would be. That long and narrow basket was only $15 on sale at Hobby Lobby (seriously, that store should start paying me for how often I write about stuff I bought there). It’s perfect for holding Juliet’s leash and whatever else I want to store out of sight near the door. And those ten double hooks are so luxurious compared to the seven single pegs we were dealing with before. Between the storage ottoman, the hooks, and the shelf, we’ve definitely crammed a ton of useful storage into this one little wall in our living room. It’s almost like having a real foyer or mudroom!

Here’s the whole operation from another angle, so you can see how much it really is just snuck into the back of the living room.

I’ve got a little magazine basket to the left of the bench, but it pretty much stays empty because I hate the way that magazines fold up into themselves when stored on their sides. I feel like the bench looks kind of lonely by itself, though, because it’s bit too narrow for the wall. I’m thinking about adding something a little whimsical to greet folks coming through the front door, like maybe this little guy from Z Gallerie:

Or maybe even a big ol’ plant, if I can manage to keep anything alive. I’m not quite ready to venture into the realm of fake plants but my, is it tempting. I’m sure in reality I’ll just leave it as is until something at a thrift store or estate sale just speaks to me and tells ms it absolutely needs to live in my entryway. And I’ll know in my heart of hearts that that little tchotchke was meant to be with me.

By request, here’s a price breakdown:

So,
Not too shabby. Of course, it helps that I had things like paint, brushes, spackle, etc. on hand. If this is one of your first ever DIY projects and you’re starting from scratch, you can expect to spend close to $100 total (assuming you don’t have to buy tools like a drill, level, and screwdrivers, which can up the cost substantially). The great thing about projects like this is that once you’ve got some basic tools and supplies on hand they will last you forever and you can really build almost anything you want. It’s kind of like stocking a kitchen with the right tools and ingredients to be able to make a wide variety of dishes. Except I have never been nearly as terrified of my mixer as I am of my circular saw.