My Big Plans for a Small Kitchen Makeover

Besides being as old as my grandfather, our house has a bit of an interesting history. We bought it from a house flipper. I’m told that the folks who owned it before him had taken out a second mortgage to remodel the place and foreclosed before they could finish. So this guy bought it at an auction, completed the remodel and sold it to us for a TIDY profit (after we’d completed all the paperwork for the sale I found a document showing that he’d bought it for 100k less than he’d sold it for). We are so lucky to live in an old house that has been mostly updated, but there are a few quirks owing to the fact that the renovations were completed by two different owners. And besides that, there are a few cosmetic issues that I’m sure would come up even if the house hadn’t been flipped-everyone has different tastes and there’s no way to predict what the next owner will like. All that is to say that our kitchen is cute and nice but could use a few changes. I’ve been thinking about it for years, but when I found myself feeling jealous that Jack’s new kitchen was nicer than mine I decided the time had come to finally do something.

The photo above illustrates one of the “quirks.” The cabinets on the left are new, but the cabinets on the right are not. That doesn’t really bother me, actually, except for two small issues with the drawers. 1) The old drawers are starting to show their age. I don’t know if it’s dry rot or what, but the silverware drawer makes this awful grinding sound when you open it and we’re treated to a steady flow of sawdust in the cabinet below. 2) I want to replace the drawer pulls with something more my style but the new cabinets/drawers are laminate and so drilling new holes for the pulls is not so simple. I actually bought some black bin pulls for them ages ago but the holes don’t line up. 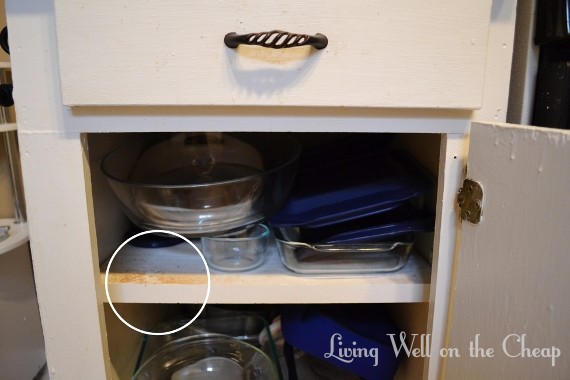 So I’m not sure how to go about replacing the drawers, but I’m going to figure it out.

I used this old photo to illustrate some of my other concerns. The wall color and backsplash are just not my style (the countertop isn’t really either but that’s staying). I like the cover over the range hood but the fan itself is really, really bad. I’m trying to work up the courage to disassemble it so that I can see how/if it’s vented and assess whether it will be a simple matter to replace it with a new one. And also, for the love of storage, why are there no shelves or cabinets on this wall?

I had to use an old photo above because I’ve already made some progress by knocking out the backsplash! More on that tomorrow. 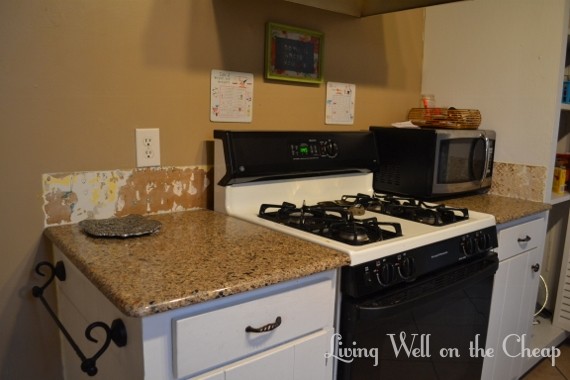 Here’s the other side of the kitchen before I finished demoing the backsplash. There’s not much I plan on changing here, other than the new drawers, backsplash, and fresh paint previously mentioned. Please excuse the cluttered counters and dirty dishes. These are “before” pictures. I’d love to someday open up that pass-through and convert the ledge into a breakfast bar but that would require the expertise of a structural engineer and contractor and thus will probably never happen. 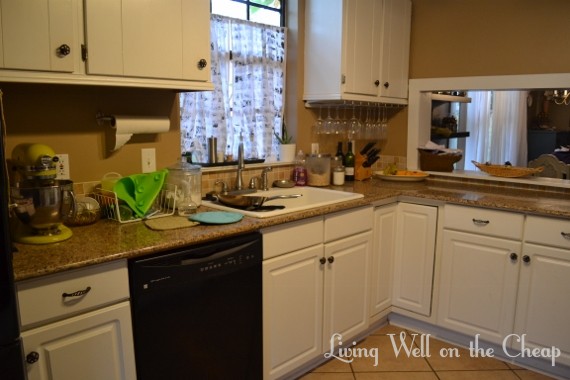 And this is not a big deal but I feel like the pantry could be improved. The door is a pain to open and close and so it stays open most of the time, leaving Jack free to rifle through whatever’s within his reach. There’s also a lot of wasted space, especially in the lower portion. 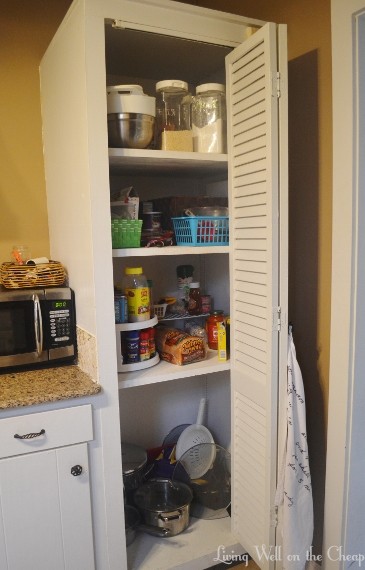 So here’s my plan:

I’m taking this one step at a time and giving myself the whole year to get it done. I have a bad habit of diving headfirst into a project, buying all the supplies, and then never finishing. So I’m not letting myself buy a single supply for the new beadboard backsplash until I’ve got the old one demo’d (check!) and fresh paint on the walls (halfway done!). But if you have advice or tips on any of the projects I’ve got planned please do feel free to chime in. Do you know a good source for buying individual bits of cabinetry (like five drawers?)? Or have experience replacing a range hood inside of an existing cover like that?

I really don’t buy much for myself these days. Money is on the tighter side since I’m not working full time and the lion’s share of my discretionary spending goes toward cute stuff for the house (after living here for more than three years decorating is still my favorite hobby!). I splurge on a cute top or a professional haircut now and then, but most of my clothes come from the thrift store and most of my bang trims come from yours truly. So when Christmas season rolls around and loved ones start asking what I want, I’m often at a loss. This year I’m starting early with the curation of my list. Behold:

I don’t often take my DSLR camera out of the house with me-I prefer to leave it home and use my iPhone when we’re out and about so that I don’t have to worry about breaking or losing the camera I spent months saving up for. But occasionally, especially when we travel, I do like to bring the fancy camera with me and so far I don’t really have a good method of transporting it safely. I would love to have a handsome leather bag to carry and store it in, and of course vintage wins my heart for style and price.

Also related to photography: I feel like I am constantly moving my memory card back and forth from camera to computer. On one of the rare occasions I brought my camera with me because I really wanted to get some pictures of a friend’s home to share here on the blog I actually forgot my memory card at home (in the computer). Moving the card from camera to computer and back again is one of those little tasks that adds up to be really, really annoying when I am doing it every day for my blog and shop, so this nifty invention would be immensely helpful. It’s a memory card with built-in wifi, so it will automatically send photos I’ve taken on my camera to my laptop with no hassle on my part. It’s one of those things I would never buy for myself but would love to receive as a gift.

Continuing the trend of practical wishes, I’ve been coveting a rotary cutter and mat for ages. This would make cutting paper and fabric for my craft projects so much easier and more precise.

And finally, something with no practical use whatsoever. A friend of mine has a simple necklace similar to this one with her son’s name on it and I absolutely love it. I’m not sure where she got it from, but this one on etsy strikes my fancy just fine. I’m not sentimental in a traditional way but I think that Jack’s name stamped on a necklace as lovely as this would be sweet.

Are any of you lovelies already making your list and checking it twice? I’ve bought my first gift of the season already! I wasn’t looking for anything yet but I saw something at an antiques shop that I knew would be just perfect for someone I love so it came home with me. I’d better start shopping for Nick soon, because he’s so hard to buy for that I’ve come close to giving up. I hope you each had a wonderful weekend and a magnificent Monday!

I have been searching high and low for another nightstand for my bedroom. I like the Ikea one alright, but I’m not in love with it enough to get a matching pair. I love the look of mismatched nightstands anyway. The problem is that everything out there is so short! I need something that’s at least two feet tall to be even with the top of my mattress and most nightstands out there seem to fall between 18 and 22 inches. I visited several thrift stores while we were in Austin and even checked craigslist daily, but I couldn’t find anything that fit the bill. Finally, on the ride home, I got the idea that maybe I could DIY something. Below are my favorite ideas from Pinterest/the interwebs: 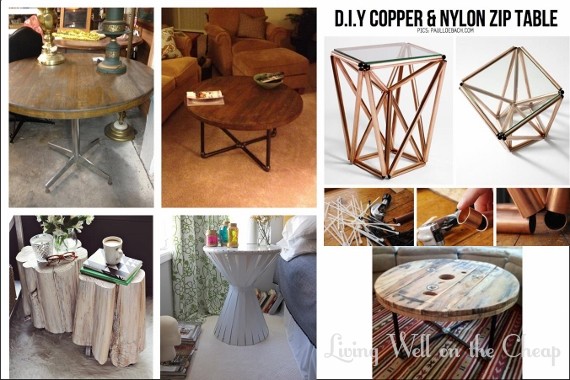 I would love love love to have a stump table but it seems kind of labor intensive. I’ve seen a house about a mile from here with a pine tree that’s been chopped up and waiting on the curb for weeks so I could maybe I could get a log/stump from there, but then I’d have to get it home, cut it down to the proper size, and dry it out, all before doing whatever finishing needs to be done to make it a functional piece of furniture. And while I am in love with the hourglass shape of this accent table from Target, I’m not sure the vinyl strips used to create a similar silhouette in the table pictured above are a good choice for a house with cats. That leaves us with pipes! And while I’m still working out the details I’ll go ahead and confess that as soon as we got back to Baton Rouge I ran to Lowe’s and bought some copper plumbing pipe. I really wanted brass but I guess they only use brass for fittings? I’m so excited to get going on my new nightstand as soon as I can find the time. Going on vacation always leaves me so discombobulated upon return! How is the house such a mess when we haven’t even been home? Those dang cats have been getting into mischief, I’m sure of it.

We need to have some work done on our roof and as we go round and round on whether to repair or replace, standard shingles or fancy ones, etc etc etc, the idea of resale keeps coming back up. Which has me thinking of where we’ll live next. Which has me pinning ideas for my future dream house that will magically be everything I ever wanted without costing a million dollars. Behold:

I love the upper cabinets in this kitchen. I use the tops of our cabinets to store rarely-used serving pieces already and love the idea of having glass doors to let them be on display without getting so dusty.

This is what I imagine the back of my perfect house looking like. I would love to have a backyard that’s private enough to leave all those windows uncovered.

Something like this is completely necessary. So much storage!

This is exactly how I imagined the entry. I have this vague idea in my head of what The Dream House is like, and every now and then I see a picture and I’m like “Oh yeah, that’s it!” Like I recognize it from my subconscious or something. This photo and the one above of the back porch both had that effect on me. 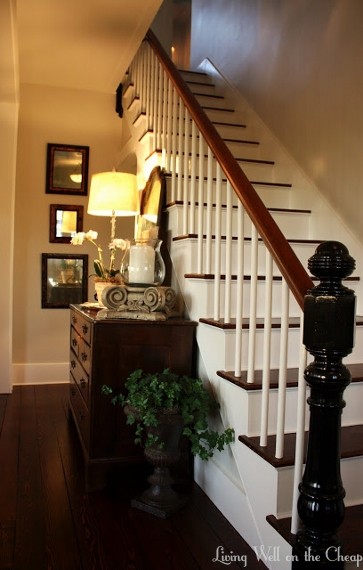 For the Love of a House

Happy Friday, my friends! I hope the weather is as beautiful wherever you are as it is here right now. The internet tells me it may rain later but at this moment it’s blue skies and 81-unheard of for Louisiana in August! I am so looking forward to this weekend. It’s the first in months that I won’t be studying and I will in fact be doing some fun stuff that I can’t wait to tell you about on Monday. Have a good one!