Hello, my friends! We are in the throes of potty training over here and I am pooped (pun intended). Between all that time spent waiting patiently, taking deep breaths, and mustering enthusiasm I’ve been neglecting some things. Like, you know, putting on real clothes. When I get a break from constantly monitoring for any signs of bodily fluids all I want to do is sit down and immerse myself in something completely uninteresting to two year olds. Hence: Pinterest. And my favorite idea spotted on Pinterest this week is something so simple I can’t believe that it’s not more popular-stainless steel islands. 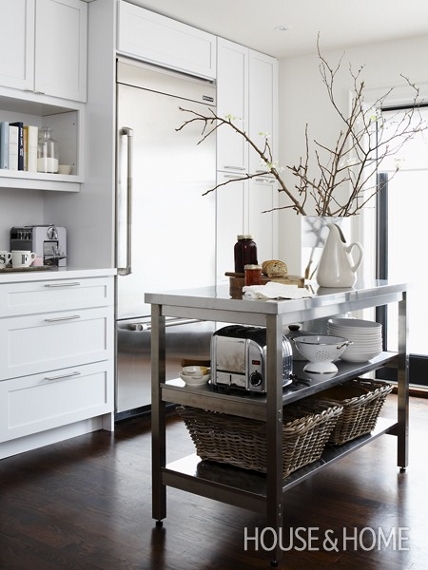 Really more like a work table, a stainless island is just so practical. It’s less expensive than cabinetry plus countertops and more durable than pretty much any other surface, There’s a reason why these are a staple in restaurant kitchens. My current kitchen is too small for an island of any sort but I’m definitely tucking this idea away for our next house. If you’ve got a large kitchen this 3′x6′ table could be had for under $500. For smaller spaces this 2′x4′ version is only $159. The cheapest option, though, is probably to check out a local restaurant supply company. The only downside to stainless steel is that it does show a lot of fingerprints and smudges. I remember from my high school days working at Sonic that this stuff was awesome for cleaning the stainless surfaces. I’ve got a hunch that stainless appliances are on their way out, but hopefully stainless islands don’t see the same fate.

As excited as I was to move Jack out of the crib, I was a tiny bit heartbroken when I realized I’d soon be taking down the mobile I so lovingly created. I hated to just cast it aside.

I’ve got a plan to reuse the yarn balls, but first I tackled a smaller project: creating a piece of embroidery to fill the green painted hoop. I started working on it several weeks ago using a spare embroidery hoop, then just moved it over to the green one after we’d set up Jack’s new bed and taken down the mobile. My first attempt involved tracing an image of tree rings that I found online. When it was finished I wasn’t sure about the outcome so I texted a picture to my friend Lauren and asked what it looked like to her.

So with that I started over, this time keeping it simpler. I used a backstitch for the rings and lettering and two rows of split stitches for the bark. And to avoid any unintentional resemblance to anatomy I stitched his name in the center instead of ever-narrowing rings. It’s supposed to look like his name was scrawled on a tree stump. 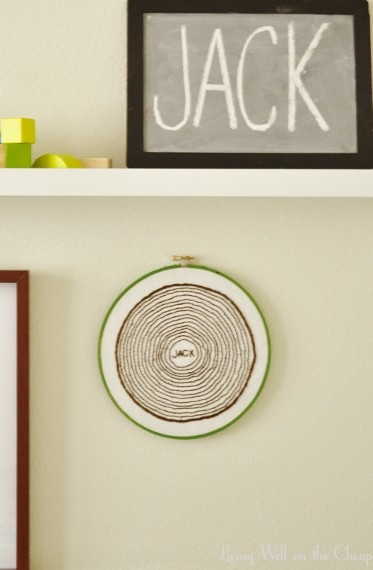 The green and brown are perfect accents in his room. 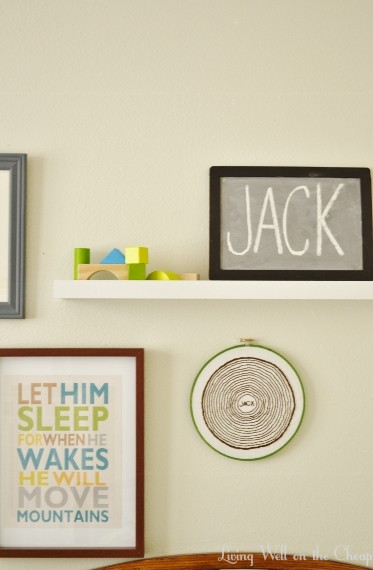 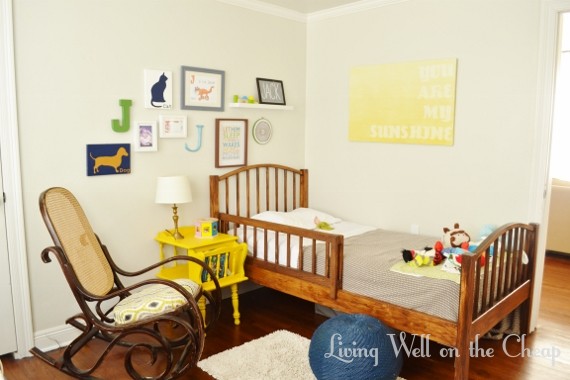 I love the addition of something round to the collection of items on his wall. I’d like to add something else to the right side but I’m not quite sure what yet.

It’s kind of symbolic-the rings of a tree are a visual marker of growth and this is a space for a growing child to play and rest. 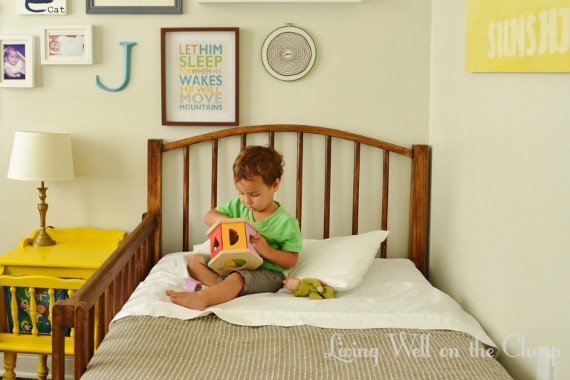 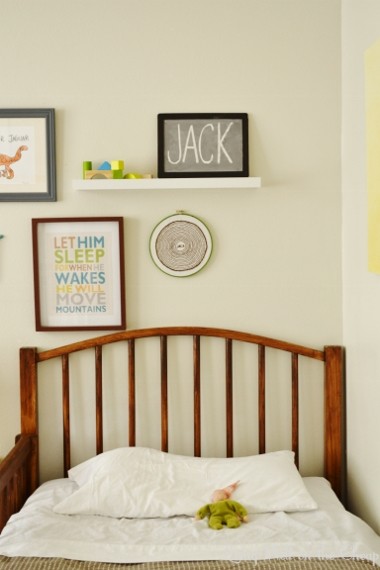 It’s hung on the wall with a nail and secured in place with some museum putty. Since he’s not confined to the crib anymore I went ahead and added a bit of putty to everything else on the wall, too, just to make sure that he doesn’t accidentally pull something down and hurt himself when he’s in there alone.

I’ve been working on this embroidery project on and off since May so I’m thrilled to finally have it completed. Next project: stringing those yarn balls into a garland to hang from the ceiling!

Even though we’re not planning on selling for a few years, Nick and I want to start working on some of the things that need to be done before we can even think about putting our house on the market. There are some big ticket tasks, like a new roof and a fresh exterior paint job, and plenty of smaller ones, like this broken fence gate. In this photo it’s just propped into place (upside down!) to provide some privacy and deter trespassers. It was too heavy for me to move on my own and would often get knocked over by strong winds.

We’ve been putting it off forever but we finally tackled fixing it this weekend. First we removed the old, rusty hardware. 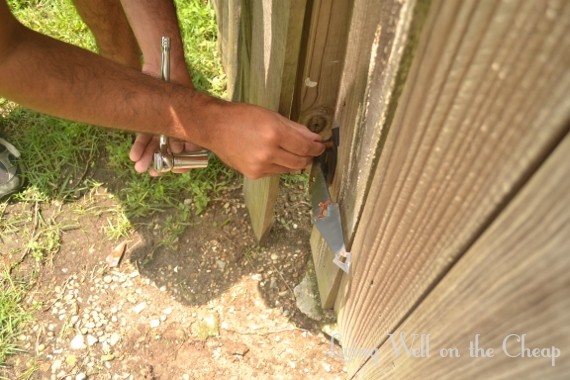 One of the reasons Nick had been dreading this task is that he thought he would have to hold the heavy gate in place while I attached the hinges, so he was pretty thrilled when I told him my plan to block it up with some scrap wood.

These big hinges were about $5 each at Lowe’s. I had no idea what type was best suited to our circumstances so I just picked these. 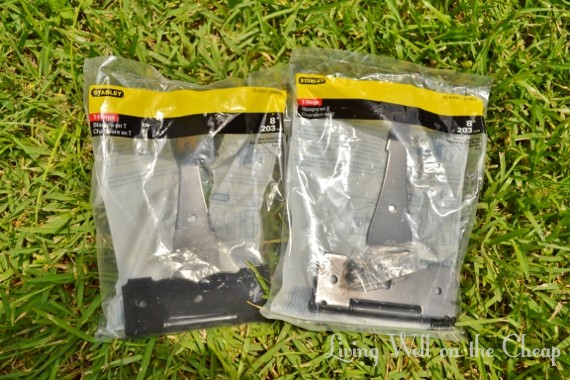 Luckily they were a cinch to install! We moved the location of the bottom hinge up a little so it would be better secured to the frame, and actually added a piece of scrap wood on the other side to reinforce it. I think the poor placement of that hinge might be what caused the old hardware to fail.

With the hinges installed I added a new latch to the backside of the fence. Our neighborhood is not dangerous, but there are a fair amount of burglaries and so we prefer to keep our home on the secure side. We’ve never been robbed, knock on wood, though someone did try to kick in the back door once when we’d just moved in and didn’t have signs from the alarm company yet. A determined burglar could jump the fence or reach over to unlatch it, but this at least creates some resistance.

And last but not least I installed a handle on the front. We actually didn’t think of this until after we’d fixed the gate, so I picked up the handle yesterday and installed it while Jack was napping. I shut the gate to see how it looked, then realized it had latched closed and the front door was locked. I had to drag a chair around from the front porch to reach over and unlatch the gate. This makes me wonder about how the guy who reads our electric meter will get back there, as well as the guy who mows our lawn. Perhaps I didn’t think this whole “backyard security” thing through. Do you think most men are tall enough to just reach over and unlatch it? It’s really amazing to me that in this day and age a person still comes out to literally look at my electric meter. He scared the crap out of me one time when I was in the backyard by myself. I could tell that he felt bad about it-he had actually called out to let me know he was there before I saw him, but I had my back to the gate and practically jumped right out of my chair when a strange man’s voice came from nowhere. Anyway, I digress. The handle makes it easier to pull the gate open when it’s unlatched.

The other problem here is that the gate sticks big time. You have to really throw your shoulder into it to get it closed. Is there a magic way to fix that? A planer perhaps?

The Making of a Big Bed

Way back in April Nick’s parents gave us a pair of twin beds that their boys slept in when they were kids. I used gel stain to darken the wood and then had to wait a while until we could get a mattress and hardware. 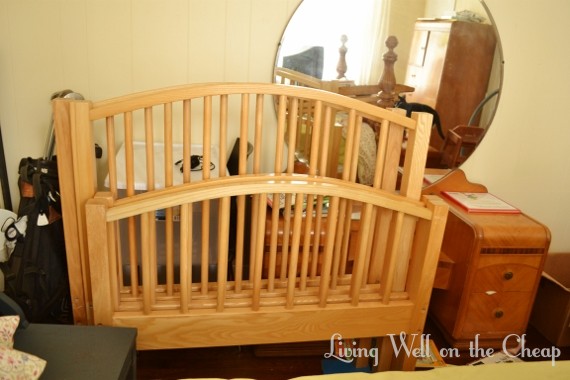 The stars aligned this weekend and Nick was able to bring a truck home from work on a weekend when we already had plans to visit his parents about an hour away. They had a twin mattress that wasn’t being used so we loaded it up. We decided to only set up one of the beds for now because Jack’s room is so small. Someday we may move him into the larger guest room and set both beds up then, but for now one bed is plenty. These beds have been in storage for a while and the accompanying hardware is nowhere to be found. I tried tracking down replacement hardware, but from what I understand there is no standard sizing for these sorts of fasteners and the company that made the beds has since gone out of business. 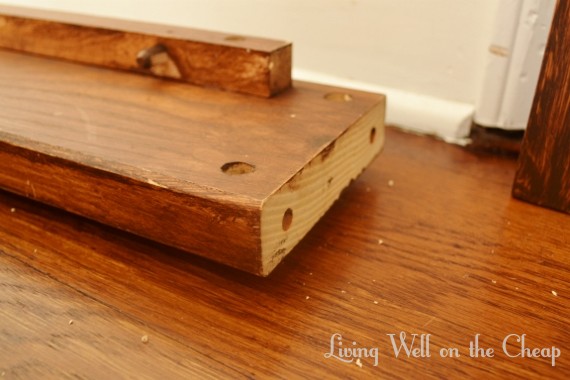 I decided to just attach the rails with some sturdy brackets instead. Nick and I measured, marked, and drilled until brackets were attached to all four posts, then measured and pre-drilled holes in the rails before attaching them in place. I’m considering adding another small bracket on the top or side at each corner but they’re surprisingly sturdy as is. 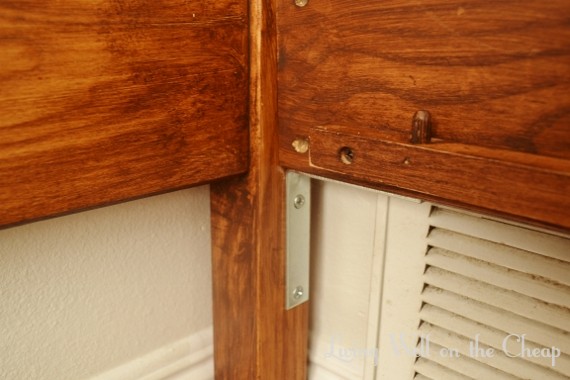 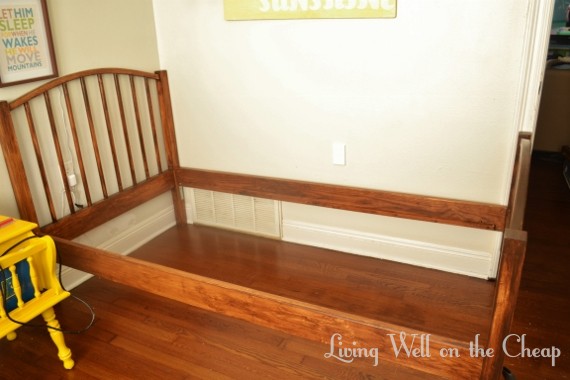 The bed came with a set of slats and what google tells me is called a “bunky board.” I love that it offers more support than slats alone without the bulk of a boxspring. 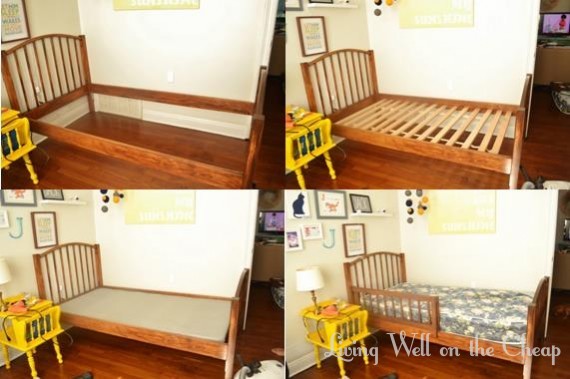 I made up the bed with a set of basic white sheets and this blanket (in gray pickstitch). It’s so much softer and cozier than anything I saw in the kids’ section and I love the way it looks. 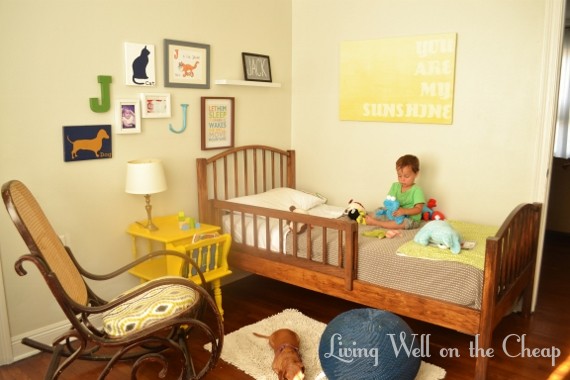 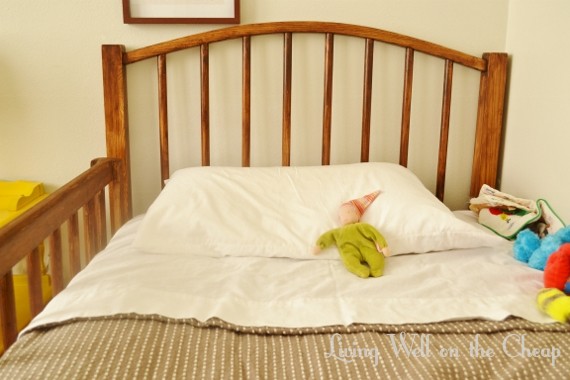 Jack was really excited about making the move into his new bed! I think it helped that my mom got him this book for his birthday a few weeks ago. Here he is at bedtime on that first night (Sunday). 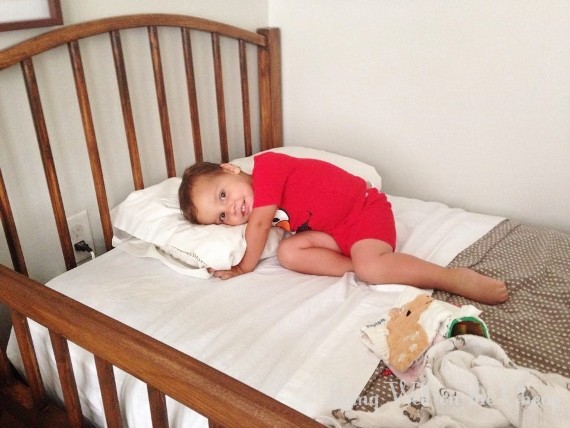 As excited as he was, he definitely needed a little more support falling asleep that night. I ended up laying down with him for a little while, then sitting in the chair, then sitting in the living room with his bedroom door open and telling him to lay back down whenever I saw him sit up on the video monitor. But I am shocked to report that he never got out of bed! Even in the morning! I’m also hopeful that we won’t need the guardrail for long, but I’ll watch him carefully for a while to be sure. He hasn’t moved around much at all so far. I still need to add a waterproof mattress cover and contraption for toddlerproofing that outlet behind the headboard (both on order from Amazon), and I have plans to rework the mobile that I made to hang above his crib, but setting up the new bed was the only major change required to take this space from nursery to kid room.

It feels like the end of an era, y’all. As I stood on his bed to remove the mobile hanging from the ceiling above I remembered being hugely pregnant and climbing into his crib to hang it a little over two years ago (I actually bent the metal mattress support standing on it with my big pregnant self). Here’s a throwback pic for nostalgia’s sake: 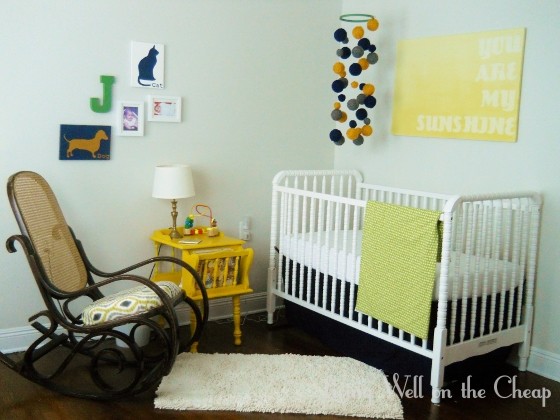 And OMG I can’t even. 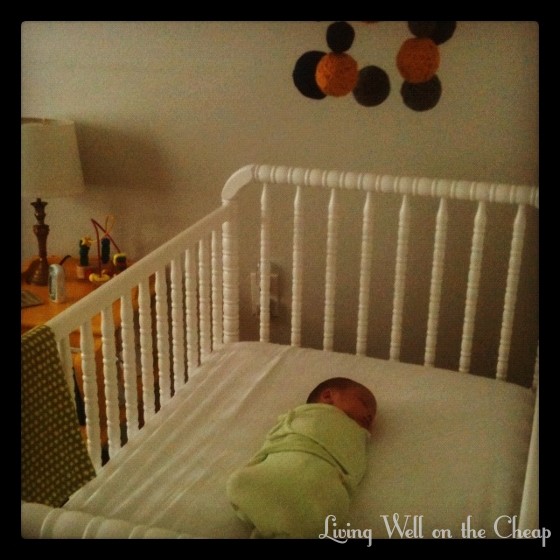