Jack is getting to the age where it’s not so easy to go out to eat but for some reason we keep doing it anyway. Besides the fact that he’s a voracious eater and is not really into sitting and waiting to eat, he requires several accessories to make dining more bearable: a snack, his cup, a fork and spoon (lest he try to steal some less baby-friendly adult flatware), a bib, and his portable placemat. It’s kind of a lot to keep up with and since the bib and placemat are used only for dining out Nick and I were finding that they tended to just clutter up the kitchen counter when we were home. I decided that maybe if we had a specific place to put them-say, a tote bag that lived by the front door-we’d be killing two birds with one stone by giving them a place to live and keeping everything we need for restaurant outings together. So I picked up this tote bag for $2 at Hobby Lobby and then set out to do some yarn-block stamping with some yellow dye that I already had. 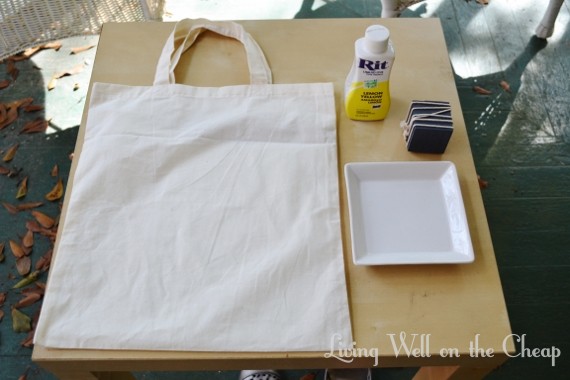 I’ll spare you the details of my technique because it didn’t work. I guess dye just wasn’t meant to be stamped on like that. After stamping the bag (before realizing that it wasn’t going to work out), I thought the handle looked a little “meh.” So I poured the leftover dye into a bowl, diluted it with water, and draped the handle into the solution, gradually pulling it further and further out every few minutes to create an ombre effect. 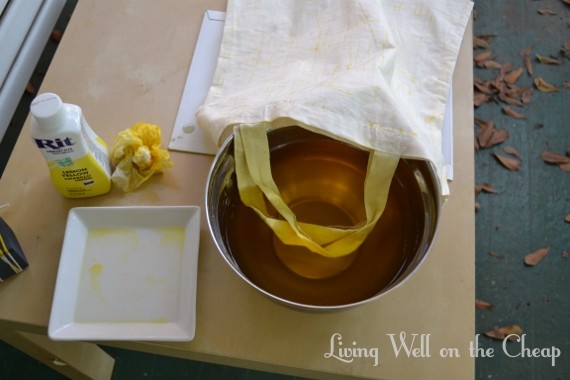 After washing and drying, you can see that the ombre is the only thing that stuck. I liked it, but it was too plain. 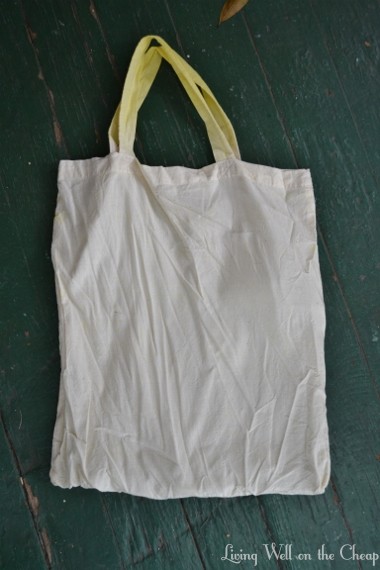 Round two: this time I added the dye to a little bit of paint and fabric medium. 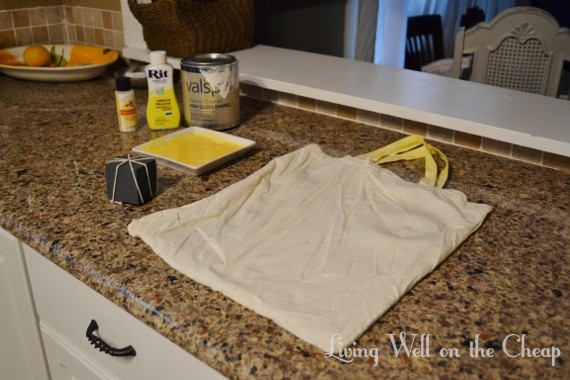 This is how you print with a yarn-block: you wrap a piece of string or yarn around a block, then dip it into the paint and use it to stamp onto your bag. 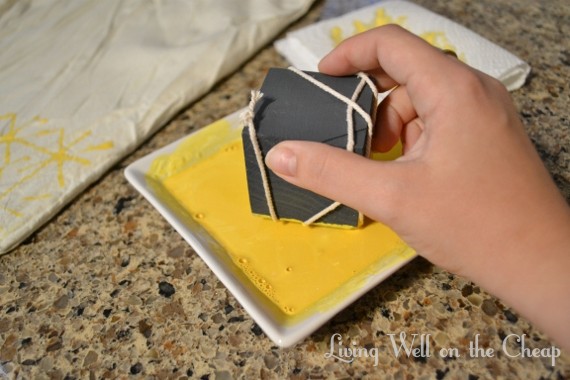 I actually decided to blot my block on a paper towel between dipping and stamping, but this is optional depending on the look you’re going for. 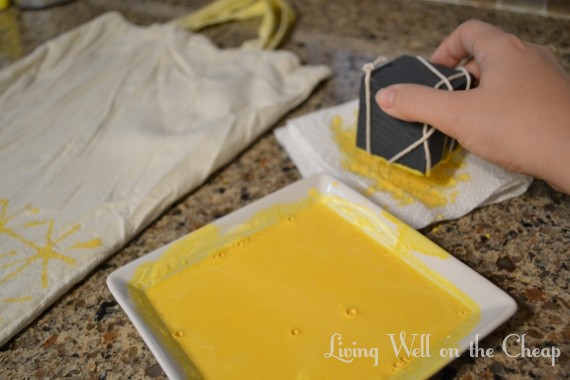 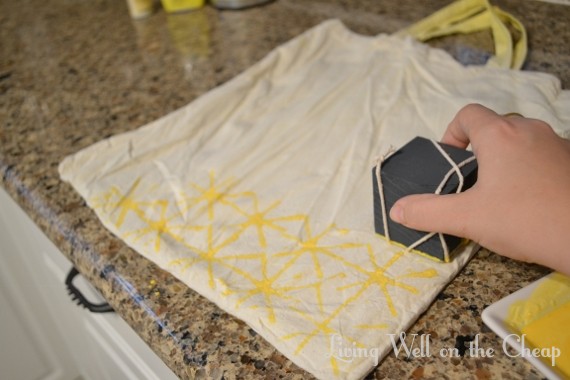 Instead of stamping the whole bag I decided to do just the lower right corner. 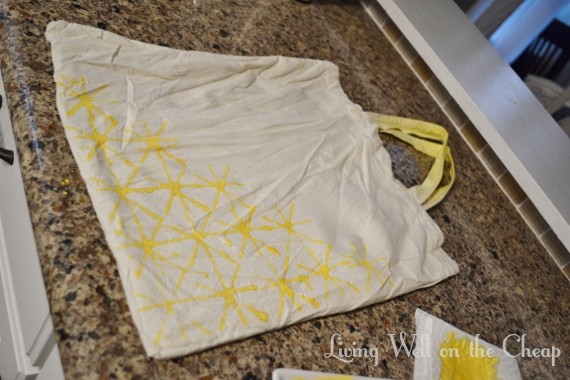 I repeated on the other side, then washed and dried and VOILA. A graphic pattern that’s a little faded and distressed looking. I like it. 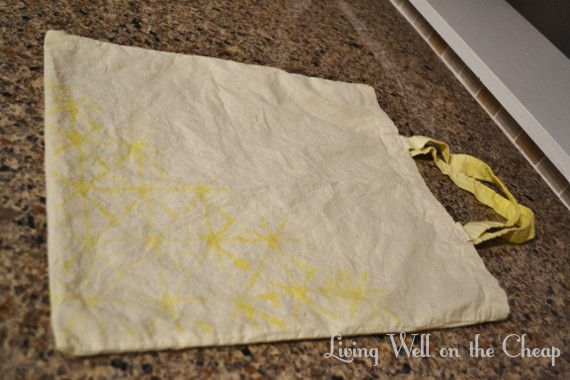 So then I gathered all my tools for restaurant survival: toy, snack, bib, flatware, extra cup, and placemat. 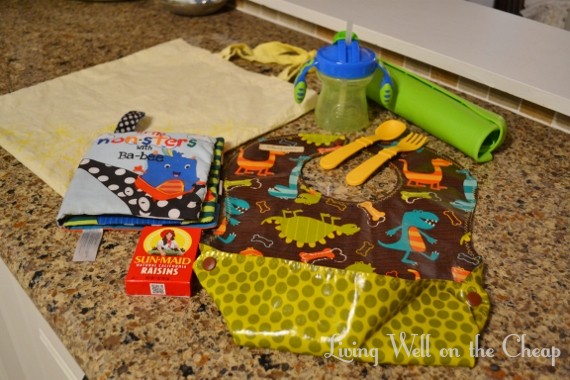 It now hangs near the front door, where we keep all of our bags and keys (don’t be impressed by my minimalist keys. I haven’t seen my real keys in two months. Those are my spare keys that have now become my real keys). 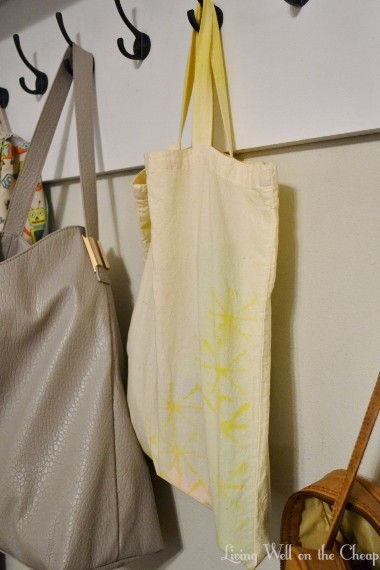 I’ll get to try it out today because Jack and I have a standing lunch date with our friends Cassie and Olive on Fridays. I’m hoping that a hummus-covered toddler will be easier to cope with if I at least have all my stuff. Here’s hoping I don’t forget the bag! Happy Friday y’all, and thanks for reading! Have a great weekend!