Iâ€™ve been keeping an eye on craigslist for the past few weeks looking for a small chest of drawers or table to put on the far wall in my dining room. I donâ€™t really have the need for any additional storage in here, but I did think it would be nice to have a convenient place for setting up a drinks station when we host gatherings. I wanted something on the taller side and a little bit different from anything we already have. And I wanted it to be inexpensive. 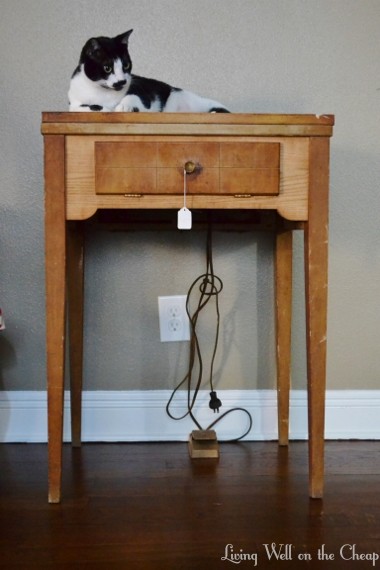 After work yesterday I took Jack with me to my favorite antiques shop (Aladdinâ€™s Lamp for fellow Baton Rougeans). Miracle of all miracles, he kept his hands to himself in the stroller and didnâ€™t destroy any of the numerous breakables within his reach. In the very very very back room I found this sewing table marked down to $40. The “as-is” condition is perfect for a home with pets and a small child. I canâ€™t imagine anything they do to it making it look worse.

The top folds over, revealing an ancient Singer sewing machine stowed underneath, and the little drawer hinges out. I assume itâ€™s meant to stash smaller sewing accoutrements. 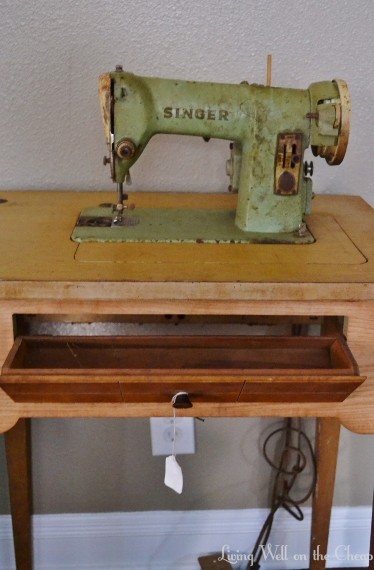 I actually was not convinced right away that it would work so I asked the owner about their return policy. He made a note on my receipt that I could return it within two days if it didnâ€™t work out, but after I left I realized that even if I miss the two-day window I could easily get my money back by selling it on craigslist.

The scale is smaller than Iâ€™d imagined for this space, and the open legs leave the electrical outlet and cords exposed (though I realized after taking these photos that I could tuck the cords up underneath with the machine). I brought in another chair and a small ottoman to get a feel for how things might work Â if I found similar items. 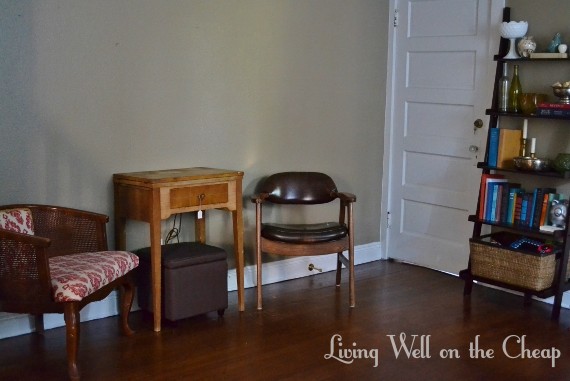 This ottoman in particular is not working, but one thatâ€™s a little larger and more colorful may do the trick. Iâ€™m thinking something like in the before photo in this post, though Iâ€™m jelly of her piano and would trade for that in a heartbeat ! 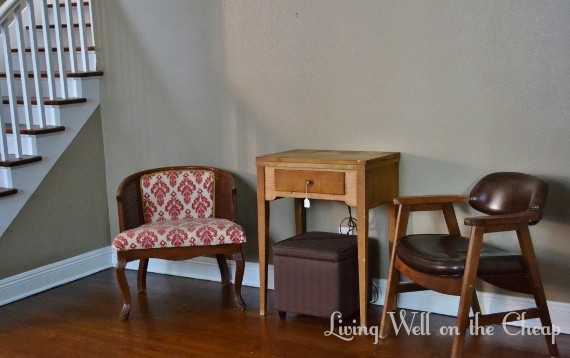 The chair on the right is from the office. I donâ€™t like it in here but the scale works and thatâ€™s exactly what I needed to know.

Iâ€™ll live with it for a few weeks or months while I keep my eye out for an ottoman and armchair, and if I decided itâ€™s just not working Iâ€™ll craigslist it without an ounce of guilt. Iâ€™m thinking this could work, though, especially once I get some stuff up on the walls. Iâ€™d like to hang a mirror and tons of family photos in an eclectic mix of frames. Thoughts?