Jack has been really into flinging stuff lately. It’s almost like an involuntary movement. He is developmentally compelled to fling. It’s not that big of a deal with toys and stuff, but it’s pretty freaking (I wanted to use a different word there) annoying when your half-asleep baby drowsily yanks the pacifier out of his mouth and flings it across the room, then starts rooting around for it two seconds later. I started trying to brainstorm a solution (beyond the obvious paci clip) and when I came up with the idea of tying it to a blanket I had the perfect fabric in mind. I have been waiting for an opportunity to use this brightly colored whales fabric for months. I ordered a fat quarter from etsy and paid less than $5 even with shipping. 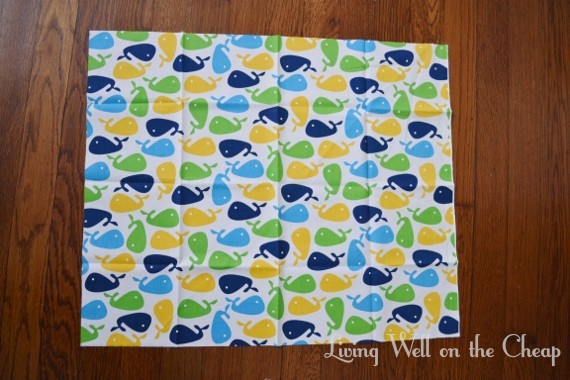 I was too excited to wash it first, so I hope that doesn’t come back to bite me in the you-know-what, but I did give it a quick iron before cutting it into a 14″x14″ square. 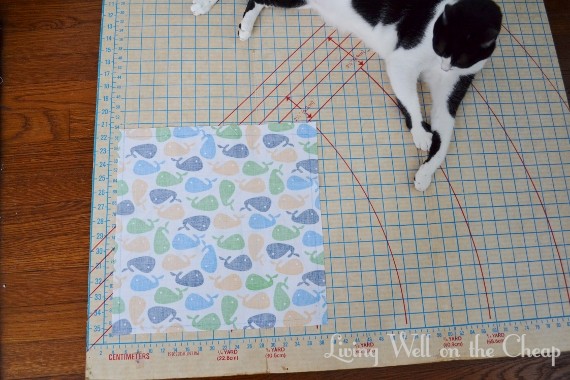 I had this white minky that my sister gave me after she made Jack a changing pad cover with it for Christmas. I cut the minky into a square of the same size and then pinned them right sides together with a short length of ribbon pointing in from the corner. Before I pinned them together I used the grid on my cardboard cutting thing to mark out a 13″x13″ square. I just used a regular ink pen since I knew this part wouldn’t show. 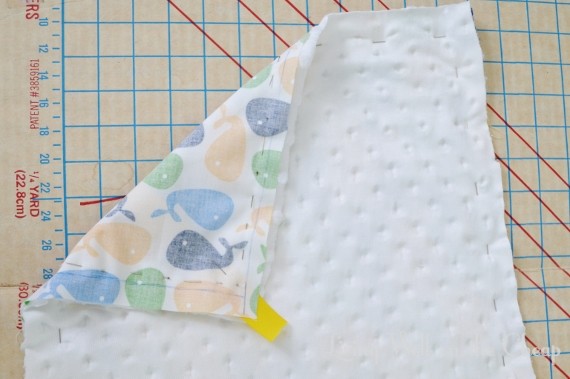 Then I just sewed along the blue line I’d drawn, leaving one corner open to turn it inside out. It’s just like sewing a pillow cover. 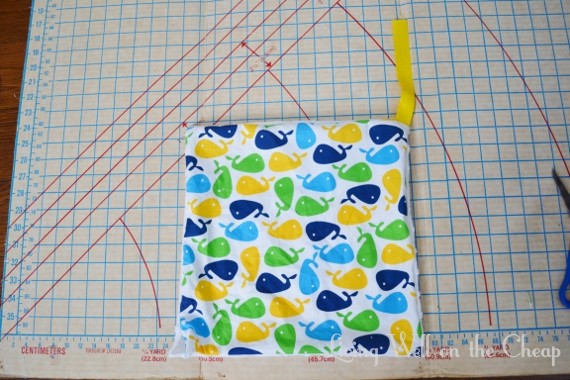 I stitched the corner closed by hand, cut the ribbon into a nicer point, and bam, I had a cute little blanket. It was so easy that I made another for my friend Gina who has a baby the same age. 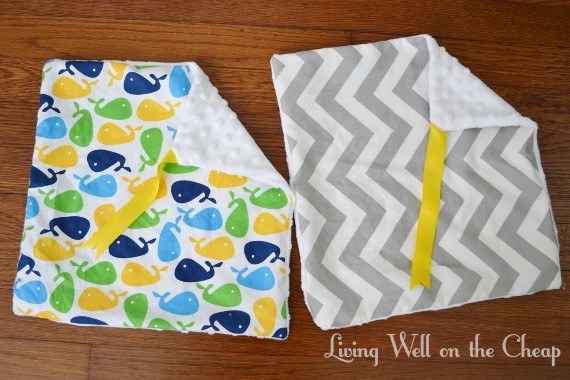 Okay I’m lying. I actually made Gina’s first because I already had the fabric (left over from the boppy cover I butchered) and I was too excited to wait for my whales fabric to come in. And lest you think I completed an entire project with no mistakes, I accidentally sewed the ribbon inside the blanket on my first attempt. 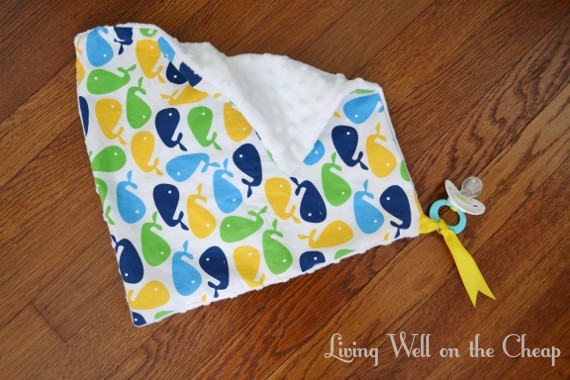 At almost a year Jack is old enough now to sleep with a small blanket (until recently we only used swaddlers and sleepsacks) and the ribbon is way too short to pose a strangulation hazard, but if you were really worried about it you could use an even shorter ribbon and a more breathable fabric like muslin.

So far the only problem is that the ribbon is actually a little too slippery, and by morning the paci has usually come loose from the ties that bind. Not a big deal unless we can’t find the *%#!# pacifier. I swear these things disappear like very expensive socks.

And with that I’m off to enjoy our Friday! Happy weekend, everyone!

8 responses to Stop the Flinging